I originally wrote this 2 months ago when I was "down"... I finally decided to publish it today.
Lately, I have been thinking a lot about evil, considering the stuff that recently happened in Connecticut and continues to happen where are soldiers are stationed, and other places. I have much less trouble in explaining evil than a devout church-going person. Because I have a mathematical background, I also understand how luck plays a role in the world. Is it better to think one's way out of a mess than to pray on it? Generally, I think so.

I can also appreciate the concept of mercy though. It's written in many places (I was raised a Christian) that Jesus was a merciful man and tended to people's physical and emotional needs. No God is needed to appreciate that there are good people and bad people in the world. There is also good luck and bad luck. I believe that life is precious, and I resent it and get seriously angry when it is taken senselessly. Human beings should make life worthwhile and protect and cherish it. And I don't wish to debate the abortion issue on when life begins. That is not my point here.

We need to help our fellow man and help him in his time of need. Just be a caring human being; I guess like Jesus was. You do a good deed and provide a sturdy shoulder for someone to cry on.

Sometimes, though, life is so very hard. It seems especially so when you are younger. When you're twenty, the world is at your feet, you're full of intensity, optimism. Life has this problem though, in that sometimes it throws you lemons. You bend like the willow tree or you snap. In karate we learn especially good lessons about the willow tree, usually in one of those “force vs. force” examples. Good technique can come out of the study of a bending willow branch. It's a good life lesson, too.

Life also has this tendency to get pedantic because as you get older and waste so much time you find yourself just existing, trying to pay the bills and usually wondering what's around the next corner, if anything. Sometimes it's just more bills. Sometimes it's nothing other than perhaps depression about your current condition. Sometimes, however, it's a spectacular sunrise or sunset. 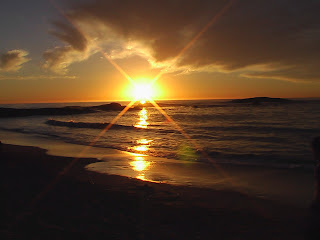 I was just looking through some old photographs that I've taken of sunrises and sunsets. It made me think, that you're haunted by your memories. You think they are just leftover things from growing up and then maybe you run into or hear from someone you used to know and perhaps they are struggling just as you are, you stop, because all of the crap isn’t just happening to you, maybe there can be a little hope that wasn't there last week, making you feel a little bit like this life is worth living, even though the downs oftentimes outweigh the ups.

The ups, that's what I live for. Like many of you, I have kids and I'm constantly getting my ups from thinking about or helping them. But when we care for people, like our kids, when they have down days, you become down as well. Perhaps these are sympathetic relationships, like the shark and the remora, which can't exist much without the shark. You have to remember to be sympathetic and solitary, taking care of yourself, as well as them. It's one of the things I'm learning.

Wil Weaton (Star Trek Next Generation and Stand by Me) wrote recently about his own depression, something lots of us struggle with, and about how things are so much better now. I am glad for him and at the same time tell my daughter and others to continue to do the "right thing" because that is where the true accolades for doing stuff correctly ultimately come from.

Had Wil had a bunch of people not pulling for him and instead sabotaging his capabilities perhaps more therapy or stronger meds might have been needed to improve his outcome. At a minimum I suspect talking to another person eventually factored into some recovery. That person had to be supportive, otherwise I don’t think we would have heard such an outcome from him.

The point being we all need one another, we all need support and caring. There is certain class of people who just really mess with my head; I just don't get their attitude; these people are the ones that have to constantly "put down" others. It's like we have two camps of people in society at war with each other. Take care of others or just think about yourself. Where does this selfishness come from? A warped upbringing from parents that don't have a clue how to raise kids? These two camps are so polarized, just to have these two positions, like I said, I just don't get it.

I'm really believe that a form of compromise is what is needed as a life lesson. We do need to take care is each other. At the same time we need to take care of ourselves. The effort to get ahead at the expense of others really needs a balancing point of view, the balance I think is charity. The charity of time helping others, not just the charity of money (ala Bill Gates). It’s not one or the other, it’s actually both. “I gave at the office, so don’t bother me at home.” Or “I give my money to United Way, I can’t really afford to volunteer for your xyz project." This attitude doesn't work for me.

So, how in the world do we teach this kind of dual charity to our kids? My daughter needs to learn better how to be self assured, to have a better sense of self, perhaps the overused word is self esteem. At the same time she acts like a magnet for all these "I'm in it for myself" people. And when the inevitable happens and she's hurt, it's like the weight of the world is upon her, then indirectly me, because I care; after all I am the Father and I truly care about her well being.

One way of thinking about it is that she should be selective in who she engages with, because friends and teachers who truly care are never in it for themselves. The only issue I have with this kind of philosophy is that my daughter cannot be insulated from these selfish people in the real world. You see, here too we have a balance between "me time" and being "out there."

Eventually she has to face the world and it is full of these people who put you down, use you or downright control you. How does she learn to deal  with that part without destroying her self esteem?

My dad learned how to swim when his dad threw him off the river bank and into the water. I learned to swim from a teacher in a pool. My son and daughter learned to swim in much the same way. But regrettably later, on the swim team, no less, she is presented not by the competitiveness of the swim meet and the opposing team... she is forced to deal with self serving, rude and selfish teammates and coaches who can't catch them in the act. It's almost as if we are collectively teaching our kids that if you can get away with it, go for it.

I find this disturbing on so many levels. Is this OK under any circumstance? Eventually don't these people realize the error of their ways? Does it balance out in the long run? Maybe you can convince yourself that this might eventually be true, maybe even in most of the cases, but what of the interactions these people have with others along the way? Consider the debris falling out of this truck of life and hitting your windshield. Perhaps this is an oversimplified way of looking at it, or is it?

Certainly the costs to repair someone’s life are considerably higher than a broken windshield. The costs are astronomical when it besets mental illness and something like Connecticut... or Hitler.

Everyone has the "god given" right to be a parent, but how, as a society, do we help that parent with instilling core values, such as caring for your fellow man, into their children.

Otherwise, we have too many narcissistic people doing bad things. Or evil things... When the government steps in to enforce societal rules, something has already been lost. A crime has to be committed before there can be punishment, but someone has already been hurt before the crime is committed.

Really, doesn't it start with the parents?
Posted by Tom at 10:22 PM