Spend our way to a better economy?

There are some interesting points being made here

This podcast via Ron Kaufman deserves a listen.
Posted by Tom at 9:12 PM No comments:

This does not even sound interesting to eat... Link here
Posted by Tom at 8:46 PM No comments:

Visit from Japan and some Karate-do history 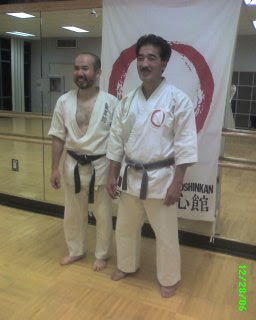 Shihan Shinichi Nagayama (left) visited Renshi Mike McGowan's family for the holidays this year. Renshi Mike asked and subsequently we jointly trained together with Shihan Nagayama at Shihan John Choi's dojo in Walnut Creek. It was great to train together. Shihan Nagayama is from Japan where he trains in Hanshi Eishu Takahashi's style, Yoshinkan.

Our two styles have their origins in the same master, Kanken Toyama (b.1888, d.1966), who had opened his first dojo in 1930 in Japan. The dojo was called Shudokan (The hall for the study of the Way). It is believed that Toyama did not name his style of karatedo, rather referring to it simply as Okinawa Seito Karatedo. Some have written that he believed that all of karate was one. Because of the name of the place of training, eventually Shudokan became used to refer to the name for Toyama's training. But it is said that Toyama considered Shudokan to be more of a place for training than any one particular style. The Shudokan Dojo was a major training center for senior students of Karate-do from all over Japan and Okinawa.

In 1966 Toyama died without naming a successor. Many of his senior students have since established their own styles; a partial list:
These last two students, the late Hanshi Ichikawa and Hanshi Takahashi, have maintained the values of "traditional" martial arts by not introducing competitions or tournaments. They have preserved the spirit and traditions of Budo in their dojos, as did their teacher before them and the Shihan, Renshi, and Sensei who follow them. Doshinkan today is lead by the late Hanshi's brother, Hanshi Nobuo Ichikawa.
Posted by Tom at 9:56 PM No comments:

All the best to you and your family
Posted by Tom at 12:50 AM No comments: