A woman brought a very limp duck into a veterinary surgeon. As she laid her pet on the table, the vet pulled out his stethoscope and listened to the bird’s chest.

After a moment or two, the vet shook his head sadly and said, “I’m so sorry, your Duck Cuddles has passed away.”

The distressed owner wailed, “Are you sure?"

”How can you be so sure?” she protested. “I mean, you haven’t done any testing on him or anything! . He might just be in a coma or something.”

The vet rolled his eyes, turned around and left the room, and returned a few moments later with a black Labrador Retriever.

As the duck’s owner looked on in amazement, the dog stood on his hind legs, put his front paws on the examination table and sniffed the duck from top to bottom. He then looked at the vet with sad eyes and shook his head. The vet patted the dog and took it out, and returned a few moments later with a cat.

The cat jumped up on the table and also sniffed delicately at the bird from head to foot. The cat sat back on it’s haunches, shook its head, meowed softly and strolled out of the room.

The vet looked at the woman and said, “I’m sorry, but as I said, this is most definitely, 100% certifiably, a dead duck.”

Then the vet turned to his computer terminal, hit a few keys and produced a bill, which he handed to the woman.

He asked the driver, "Got any ID?"

The driver said, "Bout what?"

From a recent RFP response (work in progress):

In the notes column from the person working this section:
god bless the command line
Posted by Tom at 10:26 AM No comments:

Battery life has always been an issue. It is one of the more mundane, yet increasingly prominent challenges in the wireless world. Phones are becoming more powerful, applications more complex, and even though batteries are not benefactors of Moores Law, they too are getting slimmer, lighter and longer lasting. But there comes a point, and its fast approaching, that battery technology will hit a wall physically unable to get any smaller, yet under increasing pressure to have more oomph! After Trevor Baylisss famed clockwork radio, the UK has spawned yet another mighty innovator, Peter Ash a 16 year old schoolboy who hooked up his sisters hamster wheel to a phone charger, and hey presto! Free juice. Rumours that Fitness First is teaming up with Carphone Warehouse to offer a corporate solution to recharging batteries remain, at this stage, a complete fabrication.

I was having trouble with my computer. So I called Harold, the computer guy, to come over.

Harold clicked a couple of buttons and solved the problem. He gave me a bill for a minimum service call.

As he was walking away, I called after him, "So, what was wrong?"

What's that? in case I need to fix it again?"

Harold grinned.... "Haven't you ever heard of an ID ten T error before?"

Q: What is the proper procedure for rebooting my Etch-A-Sketch?
A: Pick it up and shake it.
Posted by Tom at 10:43 PM No comments:

After not feeling so well this morning (something I ate last night) I finally got myself together about 3pm and did some fixit stuff around the house. After a bit I actually went out to the garage-tackroom and put one more sheet of drywall on the ceiling.

I have 2 half-sheets to go up and that's the end of the drywall work, so am nearing the end. I also used joint compound on screw-heads and joints, so I only have about 60-80 square feet of that left to do, and then I'm caught up with the drywall installation itself.

After this, I think it's get everything out of the room, sand the joint compound, paint first coat of paint and we're pretty much ready to move the appliances, finish the lower cabinet installation. We're getting close to the end!

Work-- been busy, another RFP is consuming my time, fell asleep last two nights at the keyboard... I have an associate that's pretty much in the same boat, last week there was mention of "driving around aimlessly looking for chocolate..." I keep thinking...

For the good news around here, Eunice has signed on for a coursework in baking and pastry at the California Culinary Academy. It starts in November and runs thru June. We will have to rearrange finances and schedules around here, but I think it's worth it. This is something she's been talking about for some time. I'm especially looking forward to chocolates, since she gets to bring home some of her classwork!

Quote for the day: “When you're in the elevator and it stops to pick up someone who stood for five minutes waiting for the darn thing only to go DOWN one floor, and you say "that lazy b*&%$#"...... You need to pray at work.”

I need to rant on programs and/or people that feel they need to override the protocol drivers already on your system in order to install their own, "better" driver.

I have just spent the better part of 2 hours, backing out some software that installed itself, as an update, to an existing set of software.  The original intent of this software was a database of hotspots around the world. Sounds like a good thing, right?

So, why do they think that someone interested in a database of hotspot locations would like, all of a sudden, want to have a new set of protocol drivers for a wireless card installed?

Jeez, nothing was working, my laptop was crapping out with the big "blue screen of death" and a huge memory dump, each time I booted.

Bubba was bragging to his boss one day, "You know, I know everyone there is to know. Just name someone, anyone, and I know them."

Tired of his boasting, his boss called his bluff, "OK, Bubba how about Tom Cruise?"

"Sure! Tom and I are old friends, and I can prove it."

So Bubba and his boss fly out to Hollywood and knock on Tom Cruise's door, and sure enough, Tom Cruise, shouts, "Bubba! Great to see you! You and your friend come right in and join me for lunch!"

Although impressed, Bubba's boss is still skeptical. After they leave Cruise's house, he tells Bubba that he thinks Bubba's knowing Cruise was just lucky.

"No, no, just name anyone else," Bubba says.

And off they go. At the White House, Bush spots Bubba on the tour and motions him and his boss over, saying, "Bubba, what a surprise, I was just on my way to a meeting, but you and your friend come on in and let's have a cup of coffee first and catch up."

Well, the boss is very shaken by now, but still not totally convinced.

After they leave the White house grounds, he expresses his doubts to Bubba, who again implores him to name anyone else.

"The Pope," his boss replies.

"Sure!" says Bubba. "My folks are from Germany. I've known the Pope a long time."

So off they fly to Rome. Bubba and his boss are assembled with the masses in Vatican Square when Bubba says, "This will never work. I can't catch the Pope's eye among all these people. Tell you what, I know all the guards so let me just go upstairs and I'll come out on the balcony with the Pope."

And he disappears into the crowd headed toward the Vatican. Sure enough, half an hour later Bubba emerges with the Pope on the balcony. But by the time Bubba returns, he finds that his boss has had a heart attack and is surrounded by paramedics.

Working his way to his boss' side, Bubba asks him, "What happened? Are you ok?"

His boss looks up and says, "I was doing fine until you and the Pope came out on the balcony and the man next to me said, 'Who's that on the balcony with Bubba'?"
Posted by Tom at 3:51 PM No comments:

By Susan Rush at wirelessweek

The hacker who compromised the information on Paris Hilton's Sidekick II earlier this year plead guilty to hacking her cell phone account. The guilty party is a 17-year-old, whose name is being kept under wraps because of his age.

In February, phone numbers from the hotel heiress' Sidekick II wireless device, which makes use of an online server, were posted on the Internet.

At the time of the incident, T-Mobile USA said it was investigating the incident and encouraged customers to use passwords and monitor account activity. The teenager was sentenced to a juvenile detention center where he will serve ? months.

T-Mobile USA confirmed the teenager was the hacker and told Wireless Week in an e-mailed statement, "We are pleased the individual has been brought to justice."
Posted by Tom at 2:52 PM No comments:

Next generation avionics at Boeing for new aircraft requires a crew of 2 . . . 1 pilot and 1 dog.

The pilot's job is to feed the dog, and the dog's job is to keep the pilot from touching any of the controls.

You are a worker on a project. The weekly status report meeting is in progress. As the Project Manager goes from person to person getting status, here is what develops:

At that last word, the PM jumps out of his chair, pounds a fist on the desk, and says, "Donna, this is a high priority project that has to be finished by the due date or heads will roll! Work harder, work smarter and have a full explanation of the problems on my desk before you leave! Do you know what the 30th floor will do to me, what they will do to us, if I tell them we'll be late?"

Now it's your turn and you feel sweat beads forming on your forehead. Yeah, your portion of the project looks bad today but some good things could happen... maybe the tooth fairy will visit... maybe you will win the lottery... Sure, you could finish on time. So you say, "Going as planned, we'll be ready."

The PM nods sagely, gives you the briefest of smiles and looks at the team member to your right. The sweat beads fade and you look over at Donna with head downcast like a death row inmate.

This is why this joke developed over time... "How do you tell the difference between a car salesman and a software salesman?"

The car salesman knows he is lying.

Pencil Revolution
Posted by Tom at 4:39 PM No comments:

Other than making very strong rope, I was wondering what else they could be used for
Carbon nanotube TV
Posted by Tom at 6:41 AM No comments:

I wonder if you get tactile feedback? Hmmmm
Posted by Tom at 2:12 PM 2 comments:

I finished the outside wall on my "garage/tack room" project today. 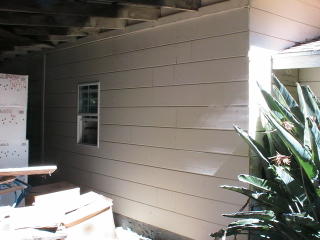 Also, did some taping on the drywall inside this room, I started in the corner where the fridge will go. 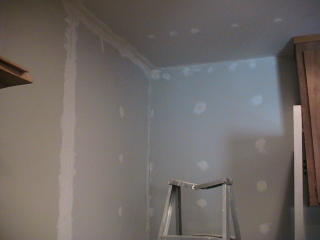 While it's cooler now, it's still plenty hot up there on the ceiling, heat rises you know...
Posted by Tom at 4:09 PM No comments:

I heard a bit on a radio program about this, don't know if it's being grown in the US yet, but this is interesting stuff...