I've got to admit, Scott Adams still has the "stuff"... Don't you find it amazing that 3 panels in a comic strip can totally get to the root of the problem and help you identify, squarely, with Dilbert?

What is it with companies (not just banks) that continue to do this crap? Do they think that their pursuit of the almighty dollar makes their decision making a process that is not important? Is that the justification for these bad decisions? It's like these people are all 5 or 6 year olds...

... maybe it's something like what I posted back almost 7 years ago, e.g. the difference between the car salesman and the software salesman?
Posted by Tom at 1:10 PM No comments:

My friend, Kreg, posted about Father’s Day, so I felt compelled to do the same.

Fathers in today's world are encouraged to be more active in their children's lives than they might have been in the past. This is a good thing. For myself, other than a few times over the last 25 years, like when I was traveling, I didn’t miss too many events in my son's or daughter’s lives, whether it was baseball, school programs, swimming, scouting, dance, acting auditions, etc. Still, I know I have traveled and work too much, knowing that I’m not as engaged with them while away.

I tucked my son into bed at night almost every day (until he was old enough) and I still do this with my daughter, and she remains amazed that I do this.

Just like Kreg, we have some simple “traditions” we’ve done together, too. We’ve done the Free Comic Book Day for both kids (which started right here in 2002 at Joe Field’s Flying Colors Comics). We have been on trips (more recently, just Julia and I) such as going up to our timeshare in the mountains and having a “break” (but no breaks from shopping trips). I was just as involved with my son, prior, with Scouts, Camping, etc. Eventually, he aged out of scouting, but he became an Eagle Scout in the process, no small thing. 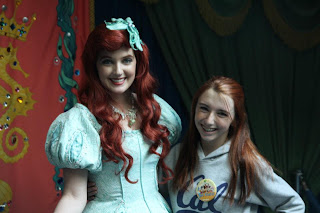 This year, the amazing trip has to have been to Disneyland, with Julia. It was a 4 day whirlwind of a trip (which included 1 day at Universal). I can’t say how much my feet hurt, because I’ve already forgotten J.

Lots of good memories were created there. She’s even used some of them to create a little “newspaper” for her Journalism class, what to see and do there, what some issues are, and what the most beautiful parts are.

I know I am not perfect and I have said "No" too many times, because we couldn’t afford it, because I was simply tired or because I didn’t think it was something he/she should have or be involved with. I know I should be more patient. I know listening is key. I regret terribly not having done as much with my son as I’m trying to do with my daughter. I hope he doesn’t think badly about me spending more time with her compared to when he was her age (they are 10 years apart in age). And I couldn't have been a prouder papa than when I had to say a "few words" at his Boy Scout Eagle Court. I look back at my own father’s life and how he helped to raise me. He’s been my model and while he’s gone now and I’ll miss him terribly, I always remember him as a good Father. I can only hope my own children will remember me thus.

We always say, “enjoy them while you can” or “you never know when they will be gone” perhaps referring more to your kids and your parents, respectively. I can assure you, I get it, and I hope you do, too. #FathersDay

Space and Dreaming and 1/2 cent

This has been going around; but I do remember how I dreamed of being an astronaut. And while I didn't become one, I was greatly influenced in my career choices, for the positive, by the space program in the 60's. These youtube videos are some of the best about capturing why this was all important. Thanks to Neil deGrasse Tyson.

Watch and pass it along.

p.s. He has a new book out and the sequel to Carl Sagan's 'Cosmos' is coming out in 2013 on major network TV.

A Plea from George

We need to stop the arguing.
Posted by Tom at 7:44 AM No comments: