Still after a few posts, the references to RUP from a few months ago are still pulling Adsense into those kinds of links. My post was a joke, but of course, Adsense isn't smart enough to figure this out.

I thought the thread between some former associates was a hoot, but then humor from a machine? Perhaps too much to expect...
Posted by Tom at 1:48 PM No comments:

Julia's in a magazine!

Get your own - Open publication

First thing into the pool 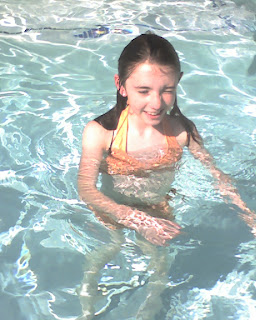 On vacation in Nice, CA. It's uncanny, I could have predicted this.

Recently, I send in a comment on the Technorama podcast listener line about this subject, what I said was that I prefer latency to be measured in nanofortnights. Chuck and Kreg didn't believe it, but this is a "real" measurement, obscure yes, but certainly in the days of the VMS operating system, with the TIMEPROMPTWAIT variable, in units per microfortnight.

Yes, the following week, I voice-mailed Chuck and Kreg with this info, so they wouldn't think that I was just making this up.
Posted by Tom at 12:27 PM No comments: